Finland’s Death-Doom Metal titans HOODED MENACE recently announced the release of their 6th full length album “The Tritonus Bell” on Season Of Mist Records. I decided to have a talk with lead composer Lasse.

1 Firstly let’s look at the history of how Hooded Menace came to life. Being from Finland, you have a rich history of Heavy Metal around you, so please give some insight. Which bands inspired you the most and also which bands do you think are strongest from Finland?

Hooded Menace was formed in 2007 in Joensuu, Finland. The seeds of doomy death were sown much, much earlier, basically… When Teemu, Juha and me formed Phlegethon in 1988, we considered combining Candlemass-y doom metal with death metal style vocals, but at the time it felt a bit too weird idea. We were very young, just 14-15 years old, and pretty excited about a bit more technical music, so we went with death/thrash metal instead of the style that would have been much more unique, given it was 1988. So it took a good 19 years to get my death/doom band going (laughs). When it comes to inspiration, obviously Candlemass was/is huge – hands down my all time favourite doom band – but also the slower stuff from Autopsy and Asphyx needs to be mentioned, not forgetting Paradise Lost, Winter and Cathedral. That’s basically the foundation Hooded Menace is build on. You may add Blind Dead movie series on the top of that! Finnish bands never inspired us that much other than Thergothon and Reverend Bizarre to some extent. Our original/main influences are those older bands outside of Finland that I mentioned before. That´s the stuff we grew up on.

The strongest bands from Finland? Well, the two aforementioned groups for sure, plus old school acts such as Funebre, Disgrace, Xysma and Beherit. “Spell of Iron” by Tarot is the best heavy metal album ever to come out of Finland, a spectacularly top-quality heavy album given the fact that in the 80´s Finland was definitely not “the land of heavy metal” as it’s known now. For example, Sweden was light-years ahead of Finland at the time. As you can tell I’m mostly into the old stuff, but as of late, I’ve been digging the hell out of the debut album from the band called Morbific. They come from a tiny town of Kitee which is pretty close to our homebase Joensuu, so that’s kinda neat as well!

2 Going back to “Fulfil The Curse” and “Never Cross The Dead” which are albums many regard as modern classics. Do you feel this is the definitive Hooded Menace period or do you think you have surpassed these works. How do they bear relevance to you now, magnum opus(s) or just the foundations?

Well, each album is a little different. Let me put it this way; “Never Cross the Dead” is probably our best take on the death/doom style that was introduced on our first demo, but especially on our last two albums we’ve drawn influences from a wider range, and for me, that is more interesting than slavishly sticking to a formula crafted a decade ago. I’m proud of the early albums but I’m more excited about what we are doing now.

3 All 4 of you have been and continue to have involvement in other bands, for you, what is the importance of Hooded Menace compared to the rest?

For me personally, Hooded Menace is the priority. It’s kind of an ultimate band for me where I can express myself on a bit broader scale than in any other band so far. It’s fulfilling and rewarding and there’re consistence and lifespan to it. The band has become a huge part of my life. The other bands I am/have been involved in since 2007 are side-projects, excluding Vacant Coffin.

4 Along with your 5 (soon to be 6) full lengths, you have done a lot of split releases. With Coffins, Asphyx, Horse Latitudes and more! Why do you favour these releases? Do you find them an important part of underground culture in the modern day? (Ed: I personally love splits, especially 7” ones).

As beautiful idea as it is to join forces, so to speak, with a band that you have respect for, a split record is not my favourite format though. Sure there are some excellent stuff (Asunder/Graves at Sea split LP comes to mind immediately), but mostly I dig a regular, single band release. Of course I’m glad and grateful for our split releases, but we don’t want to do them on a regular basis. When you are at your 6th album, you may want to save shit for full albums (laughs). I’m more interested in doing a new Hooded Menace EP or something, rather than one more split, but you never know…

5 Jumping forward a little “Effigies Of Evil” and “Darkness Drips Forth” have a few similarities in their overall presentation and vibe. Do you also feel there is a reason for this? Perhaps you completely disagree or even intended this.

6 Getting closer to the present, “Ossuarium Silhouettes Unhallowed” was incredibly well received and many Death/Doom maniacs revere it. Please shed some light on what went into making such a monolithic opus and were you happy with the end result?

After the funereal “Darkness Drips Forth” album we wanted to return closer to our regular tempo mode, I guess. To be honest, those painfully slow songs weren’t much fun to perform live or jam at practice room. So, “Ossuarium…” didn’t turn out such a crawler like “Darkness…” yet there’s some really funereal stuff too like “Cathedral of Labyrinthine Darkness” which is actually the oldest track on the album. I think the album is very catchy and there’s this melancholic vibe here and there which was a bit new to us. I’m really satisfied with how the album turned out, and with hindsight I’d say it pushed us to the right direction. Jaime Gomez Arellano/Orgone Studios handled the mixing and mastering of the album and he did great job yet I think the guitar sound could have been a bit better/different, but then again I’m almost never perfectly happy (laughs), and we only had so much money and time for the studio. Jaime pretty much perfected the snare sound for us. I love that snare!

7 Now, let us talk about your upcoming offering on the altar of gloom. “The Tritonus Bell” is coming! What can we expect from this album? The advance single gives me that Finnish Death-Doom melancholy morbidity but also a strong dose of traditional Heavy Metal! Please, tell us why we should all be excited!

On “The Tritonus Bell” we’re harking back beyond Candlemass and Winter all the way to tradition heavy metal such as King Diamond, Mercyful Fate and even Ozzy. It’s still a death/doom record of course, but refined. I like the blend of 80´s heavy metal, death doom misery and death metal riffing on this album. I think it sounds and feels unforced and natural. I also busted my ass for the guitar solos. I wanted them to be a bit more technical but still definitely like little compositions within compositions. Something you could actually remember, you know.

Obviously, an old fart as I am, I got into heavy metal in the 80´s, you know stuff like W.A.S.P., Kiss, AC/DC, Iron Maiden, Dio, Accept, Ozzy Osbourne, Scorpions, and all that. So it’s in my DNA basically, and in that sense it’s actually not strange at all if there’re echoes of traditional heavy metal in our music. Then of course there was King Diamond that was actually one of the few heavy metal acts that sorta maintained my interested when I got into harder styles of metal like thrash and then death metal. I mean when you get your serious thrash metal kick at such tender age there is a short period of time when you tend to reject the older, less heavy and less hard stuff that came before. You end up recording Kreator “Terrible Certainty” over Scorpions “Blackout” c-cassette and such stupidity (laughs). That’s how it was with me and my limited tape collection and money at least. But King Diamond “survived” this transition. Maybe because of their thrashier riffs here and there and the satanic imagery. Anyways, as I came up with the songs for “The Tritonus Bell” and figured some of the riffs have a bit of King Diamond vibe to them, I remembered King Diamond guitarist Andy LaRocque has a studio, and I thought why not ask him to work on our album. So we did, and it was a great decision. Andy was super laidback and flexible to work with, and most importantly made the record sound great. In my honest opinion “The Tritonus Bell” is our best album sound- and music-wise.

8 Continuing on the new album, it has gorgeous artwork and a really unique title (presumably referencing “the devil’s note), can you explain the concept, vision and meaning that went into this new album and how it was crafted?

You are right about “the devil´s note” reference. I don’t want to explain the concept any further though but rather leave it open for interpretations. Same with our lyrics. The less we explain the more explanations there are, and we like it like that. That’s way more interesting than us stating that there’s this one and only truth. Probably everyone in the band has their own interpretations about our lyrics and stuff! Wes Benscoter painted the cover art and it turned our brilliant. We’ve been wanting to work with him and it turned out he had hoped to work with us, so there you go!

9 Finally, many of us are curious what will happen in your future. Will we see a tour to support the album, if so where can we expect to see you? Or perhaps you have other things in store you can allude towards?

We have no touring plans – Covid-19 or not. Personally I don’t miss playing live at all. Never say never though, but it’s been a long time since I craved for stages and the negative feeling has gotten only stronger if anything, and this has nothing to do with the pandemic.

Fri Jul 23 , 2021
PoleCon Hub Page: Pole Performer and Pole Competitor Resources PoleCon Hub Pages organize PoleCon blogs written by different voices within our community into themes to make it easier to find what you need. Don’t see what you’re looking for? Contribute to the blog. Need general tips for a performance, a […] 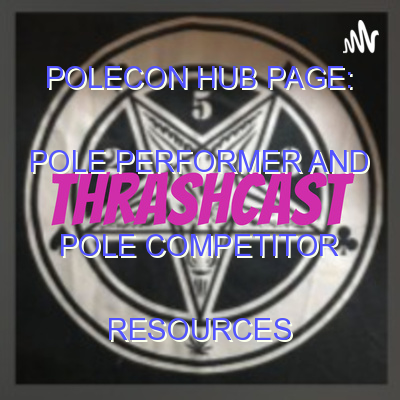