When I stumbled upon Scarred’s new self-titled album, it was one of those “came for the cover, stayed for the music” moments. While the band’s groovy tech death foundation reminded me of post-Nihility Decapitated, there’s a great deal more depth to their sound, namely prog and melodeath stylings and a keen ear for atmosphere. The clear collision course of influences made Scarred a perfect candidate for our latest Anatomy Of column. Indeed, the band’s individual and collective picks make a great deal of sense as I re-listened to the album while typing this, though there are a couple of surprises along the way. Check out the band’s selections below, and be sure to listen to Scarred if you haven’t already.

Gojira – From Mars to Sirius

Everything about it is so original. The atmosphere of this album is like no other really and it’s hard for me to pinpoint exactly what it is. I guess it’s just the combination of songwriting, musicianship, sound, atmosphere and message of this band. I remember listening to “Ocean Planet” for the first time… I instantly knew this was something huge and impactful. It just grabbed me! There is this spiritual thing about it.

It’s also a lot about the memories I associate with this album.. It represents a huge part of my life and a great one at that. Me and my best friend were obsessed with them and went to see them everywhere. To my mind this is the quintessential Gojira album.

This was the album that first introduced me to Death Metal at the age of 12! I had never heard anything quite like it: guttural vocals, crushing riffing and soli, intense drumming, and fretless bass playing such an important role.

I listened to the record on repeat back then, and it really made me the musician I am today. Through it, I discovered what I was looking for in music, and it later brought me to bands like Cynic, Atheist, Necrophagist…

I could have chosen any of Pantera’s albums, but The Great Southern Trendkill remains my favourite. Much like Iowa from Slipknot, it’s an album where the band chose to say “Fuck You” instead of cashing in on their previous success. It catches you by the throat from the very first scream (greatest intro ever!) and never lets loose. The way Phil Anselmo sings on that album, between brutal and fucked up, is something I’ve always wanted my singers to reproduce. But the main reason I picked this album is because it is just ridiculously groovy. To this day, I don’t think that I have heard an album as groovy as that one. As I got older and wiser I distanced myself from all the bands sporting the Southern Flag, but Pantera and in particular that album have shaped my drumming and the way I write music for sure.

Napalm Death – The Code Is Red… Long Live the Code

This album was released in 2005, which has seen for me many great releases: Nevermore’s This Godless Endeavor, the self-titled Chimaira album, CoB’s Are you dead yet?, Mafia by the Black Label Society or Annihilation of the Wicked by Nile to name a few. However Napalm Death’s The Code is Red… Long Live the Code was the one always charged up in my CD player. I was blown away by its unapologetic brutality, it gives the album a feeling of emergency, like a red alert, an unstable and unstoppable wave of anger. The guest appearances of Jeff Walker, Jamey Jasta bring a welcome contrast to Barney’s style as well. Jello Biafra’s appearance on “The Great and the Good” is a true tribute to the old school and binds the record to the roots of the genre. Reaching the end of this traumatic display of screams, blasts and riffs stands the song “Morale,” a 4:40 downward spiral of doom, hypnotising loops leading to “Our Pain is Their Power”, a noisy outro where even silence gives unrest. Silence is deafening.

I don’t have one specific album that inspired me during the writing of Scarred, but if I had to choose one than I would say Melting Sun by Lantlôs. I remember when Diogo showed me the album for the first time: after one listen we put it on repeat for at least 5 times. This album makes you float through the balance of contrary forces. The very bright atmospheric guitars that can take you to a meditative state sometimes drop into a deep hole with heavy, doomy riffs like on “Cherry Quartz“. It resonated with what we were experiencing at that time, trying to incorporate the changes in our lives, introspection and personal growth into our sound without limitation of genre. I’m very inspired by albums like “Melting Sun” where you can perceive the personal development/growth in the band’s songwriting away from stagnation and limitation.

It’s really hard to pick ONE album that influenced this band, as everyone listens to different artists and styles…But if there is one album that definitely made a big change to the sound of Scarred then it would have to be Nevermore’s This Godless Endeavor.

A very unique album by a very unique band. Of course other Nevermore albums are amazing too, but this one is just perfect in terms of songs, production and sound. It’s a great balance between heaviness and melancholy and just simply a one of a kind record. Warrel Dane’s style of singing (may he rest in peace) over that way of riffing was very fresh when it hit our eardrums in 2005. (makes me feel old typing this btw)

We immediately switched to 7-string guitars because Jeff Loomis. His sound and riffs are just savage and it really made us want to improve our right hand technique A LOT! Obviously he’s a master lead player as well but it was definitely the riffing that kind of redefined the word “heavy” in the vocabulary of our band. Very inspiring album and it stood the test of time. A classic for sure. 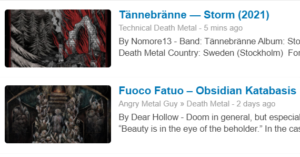