Skip to content
Ten Minute Warning – The Complete Unreleased 1983 Demos
37 years later I finally have a complete copy of the still unreleased 1983 Ten Minute Warning demos. This is the five-piece 1983 lineup of Ten Minute Warning with Duff McKagan and Paul Solger on guitars, Greg Gilmore on drums, Steve “Swad” Verwolf on vocals, and David Garrigues on bass. There had been a different lineup in late 1982, and there was another lineup in 1984, both of which also recorded demos. This is a four-track reel-to-reel recording of five songs, 18 minutes and 44 seconds total, recorded in the Summer of 1983 at their rehearsal space in David’s house near Woodland Park by engineer & producer Johnny Vinyl aka John Blatt. Remixed by Johnny Vinyl and Steve Verwolf in 2008 in preparation for an official release than never happened. There’s no official track listing. Based on my knowledge of the band’s catalog I was able to positively identify only three of the five songs by name, leaving two song titles as question marks. Any experts out there with insider information can feel free to contribute the missing names.

Duff, Greg, and David laid down the basic tracks together first. After that Swad and Paul came in and recorded the vocals and lead guitar parts separately.

The guitar sounds are incredible, with neck slides and cyclical patterns, making it sound similar to Ron Emery in T.S.O.L. circa “Thoughts of Yesterday.” Paul’s unique guitar sound was created by using a Music Man amp with a built in “Phasor” knob, producing the same effect as a Phase Shifter foot pedal, which was always kept turned on during the whole recording. The tempo often starts out slow, speeds up, then slows down again in a roller coaster pattern, alternating slow/fast, quiet/loud, quite different from the breakneck hardcore sound that Paul and Duff had been playing with the Fartz only six or eight months earlier in 1982. Most hardcore track is #5, “No More Time.” Unfortunately, the drums still have that dull thud sound as before the remix, something that is also noticeable on their later 1984 demos, and which is probably caused by having to merge the bass and drums onto one track, thus preventing either from being isolated and altered later.

Wed Apr 14 , 2021
The Fartz – World full of hate (LP 1982) Full LP of “World full of hate” by the Fartz. Relesead in 1982 by Alternative Tentacles. I had to cut off the last track “children of the grave” cause is protected by copyright and the video would have been removed. INFRANGIBILE […] 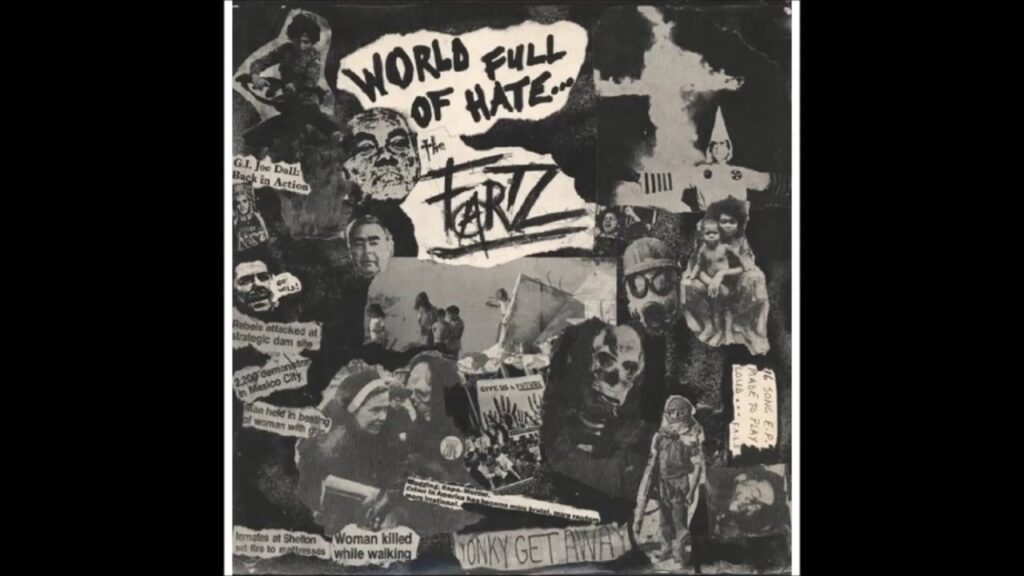